On November 18, 2014, The Kalka Law Group's client was T-boned by a driver who ran a red light. Her right foot slammed against the firewall of the car causing her to break all five toes as well as several other bones in her mid-foot. She had surgery shortly after the wreck.

Below are her X-rays post-surgery, showing the work that was done. 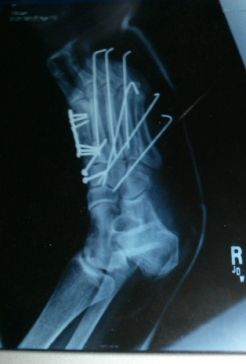 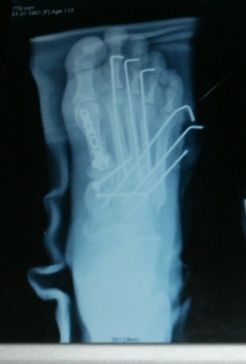 The Kalka Law Group has been recognized by numerous legal organizations as an outstanding personal injury firm, having recovered millions of dollars for past clients. Our Atlanta injury attorneys have been selected for inclusion in the list of Georgia's Super Lawyers®. Both of our accomplished lawyers have been named to Georgia Trend's Legal Elite and are rated 10.0 Superb on Avvo®.

If you have been injured in any sort of car accident and are in need of legal representation to obtain the compensation you deserve, call The Kalka Law Group for a free consultation.